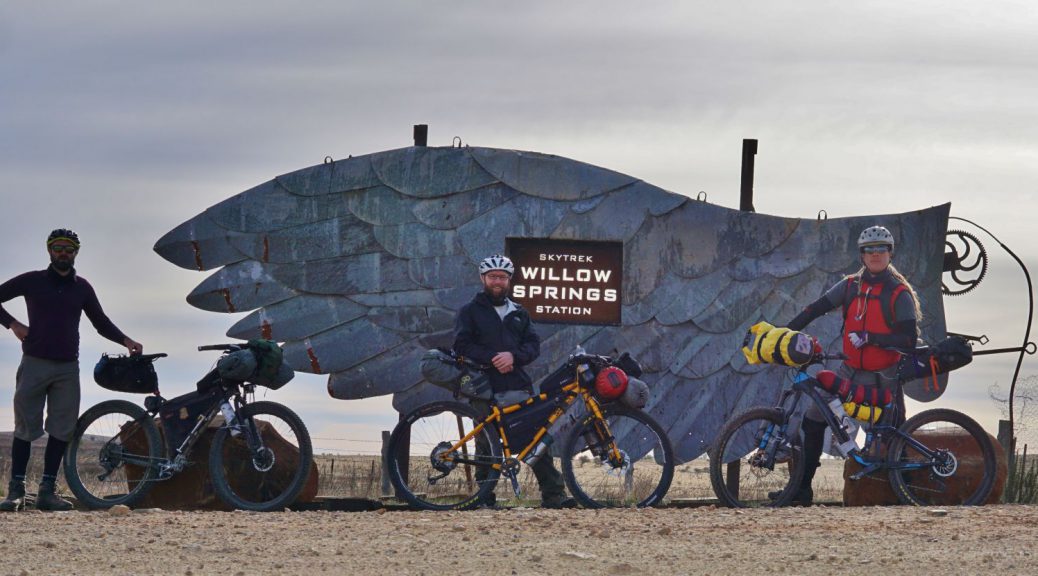 An eagle soared overhead as we crossed a vast open plain on the way to a hut for lunch. It was day three and we were a little weary from the previous days effort.  Did we really look that bad, were we really on the menu? A few seconds later a small wallaby and her joey ran out across the track in front of us and we knew that we were not the ones about to get picked off for mains.

This would be my third and most ambitious bikepacking trip to the Northern Flinders. We had a very tight timeframe squeezed into the end of Ben’s teaching semester and my mum’s 70th back in Adelaide. For Ben it would be his first proper bikepacking trip but I wasn’t too concerned from him to be taking on this challenging route knowing he has already crossed the Simpson on a motorbike and we did a lap of Tasmania some 15 years ago. Mik who had a much needed break had come a long way from that first tour he joined me on when he packed a 4kg tool kit. We were a solid team. 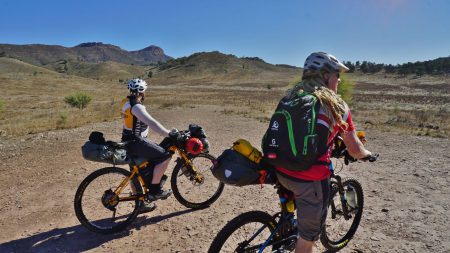 After the 5 hour drive from Adelaide we were quick to get on the trail and skipped lunch in favour of the best 15 km the Mawson trail has to offer. I would argue the views are better coming from the other direction but the downhill flow you get dropping into Bunyeroo Gorge is sublime.

Once the single track ends, it’s onto the double track.  Double track in the Flinders just creates twice as many problems as you forever search the smoothest of the two ruts. Sometimes it’s a red ochre carpet other times it’s a minefield of watermelon sized boulders.

We got into Bunyeroo in the late afternoon as light filtered through the trees and rejoined the 4×4 tourist route. Sometimes the road through here can be underwater but today we were spared just a few puddles to splash around in. Out of the Gorge the road points skyward and the ever present Eagles weren’t too far above now. It’s a brutal climb up to the Razorback but the views are spectacular. 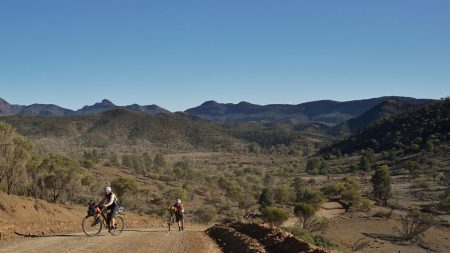 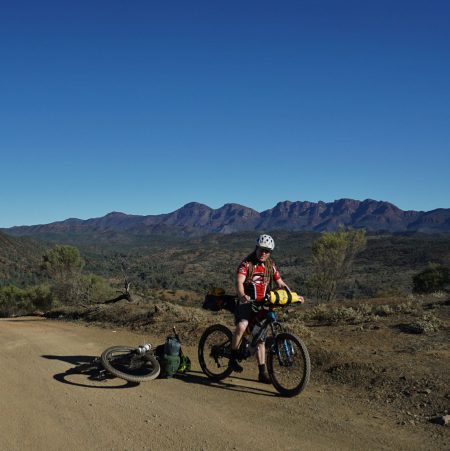 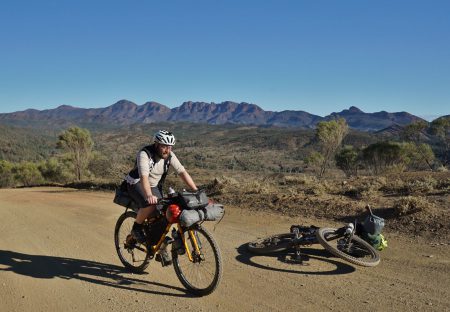 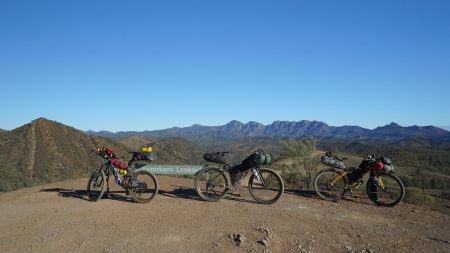 Soon after the climb you turn back off the main tourist route and back onto double track along the Mawson trail.  The sun was setting and we still had one more pass to knock off before reaching camp in the Aroona valley.  The firetrack over Redhill pushes some serious gradients on both sides and we had a very spirited ride into camp. 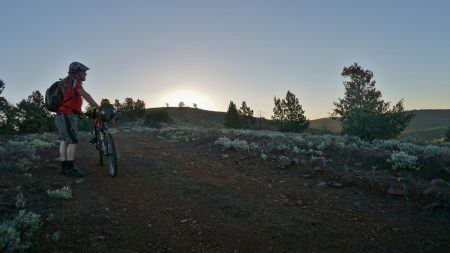 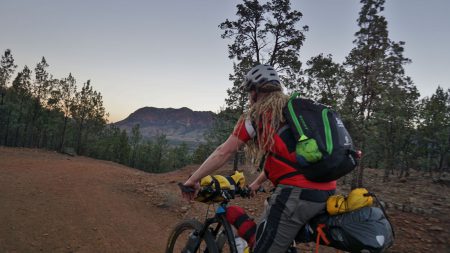 Day one ended up being a success. From the 5am wake up in Adelaide to making camp just after sunset in the Aroona Valley, the 48km ride was pure bliss and we were all truly delighted to be on the edge of the outback.

Day two was always going to be tough.  We planned 80-110km depending on detours. The first 25km were of an unknown quantity. We took off up the hill out of camp and our bodies groaned at us after the Whisky that had been consumed the night before. The Heysen trail through Aroona station is sporadically marked and is not walked enough to have a continuous trail. We got a little off course in the first few Kms and did some some fun bits of off piste riding. Soon after we rejoined a rough 4×4 trail which at times had small gorges along its trajectory. After the double track ended we were onto riding down dry creek beds and finding the best line got fairly challenging. I was having a ball on the Surly ECR as it tends to roll as fast as a road bike on beach road in this kind of terrain.

Once we hit Parachilna Gorge we were exposed to the midday sun and the relentless flies of the region, so pressed on in the hope of finding a shady spot for a late lunch. The road turns off up Glass gorge and we settled in for the climb resting for some trail delicacies at the top.

The open country that runs up to the gate of Moolooloo station has spectacular views along a road where we saw only a few cars.

Once onto Moolooloo the track returns to the same format as we were accustomed to for most of the trip. I would say this section has much bigger rocks in the creek crossings and is way more remote than the southern sections in the national park. The track is know as PAR4 and is one of a bunch of trails that pass through lease hold properties in South Australia so that tourists can pass through.  It’s 4×4 only and not to be taken lightly if you are hoping to make the pub in Blinman for dinner!

We were always under the pump to make this day happen but we were very set on our goal of a meal at the pub and a few beers to break up the journey. There’s a great detour out to Nuccaleena mine I’ve done before but we pulled the pin on this as we would be lucky to make it before the kitchen closed so onwards past the front gate we headed. The sun was getting low in the sky and we pushed on.

At Owanegan Gap, there’s a track that runs up to a newly constructed cabin that you can hire for a night if you choose to take it a bit easier than we did.

Once out of Owanegan gap there’s a bit of a climb but then its all smooth sailing down to the main road back to Blinman. This section was by far a highlight! 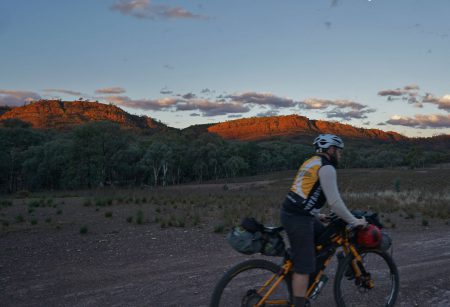 We got off the PAR4 and it we had just 14km to Blinman and a hot meal and beers.

I had been to the Blinman pub many a time and was looking forward to the warmth I knew so well. Something in me found the strength to push hard for the short distance despite the uphills and head winds, for a while I felt like I was doing night shift on the Oodnadatta again!

I rolled into to town about ten minutes ahead of the guys and found a town with all the lights out and a pub with no beer! I had been here many times before and didn’t even think to check and see if the pub was open. It turns out they had been renovating since Summer and were running a bit behind schedule….

Ben and Mik rolled in a few minutes later and we were all a little devastated. The wind had picked up and Blinman was turning on its usual mid winter chill. There’s really nowhere to hide from the wind here so we though to ride out to the old mine and seek shelter. There wasn’t much out there either so we ended up  in the mineshaft entrance way for the night!

Luck had it, as usual I had packed too much food, in fact we all had! We got stuck into cooking whatever we had left, couscous, tuna, miso soup, all washed down with a few hot chocolates.

In the morning we had a quick breakfast then headed into town for a second breakfast at the General store. The home made pies here are something to write home about, the sweet Quandong pie was definitely worth the $$. stocking up for the last nights meal wasn’t a lightweight affair with not much more than tinned varieties of dinners on show. We grabbed whatever we could including a pack of TimTams and some great home made cookies.

Day three of the ride took us initially along the sealed road out of town then east onto station tracks along the marked Flinders by bike route. This side of the ranges is a vast open plain full of wildlife, eagles continued to soar above and huge flocks of Emus roaded between waterholes. Kangaroos and wallabies numbered in the hundreds, maybe thousands. 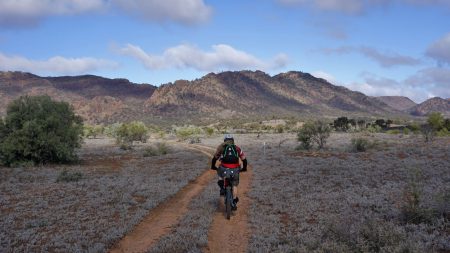 Across the open plains with a solid tailwind made for the easiest morning of the whole tour. As we turned south east the wind smacked us around a bit and the Bunkers loomed larger in the distance. 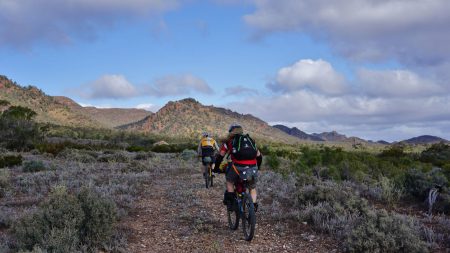 Back into the mountains, trail surfaces degraded again and we found ourselves scrambling for the best lines again. Off route is a fantastic detour into Skull rock, an old open cut mine, this turned out to be quite a highlight with unobstructed views across the mountains we had spent the past few days in. 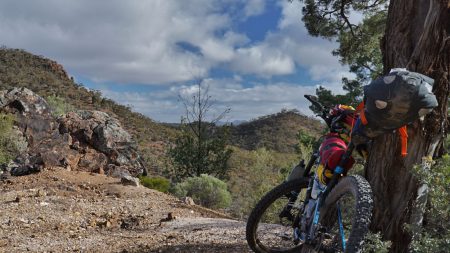 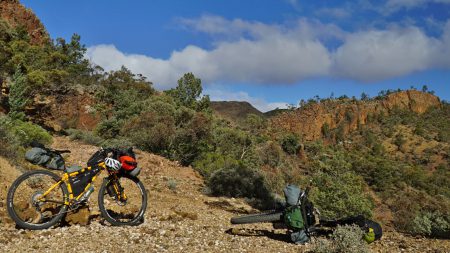 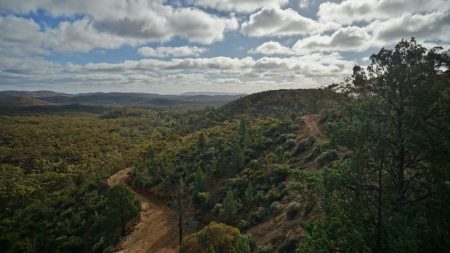 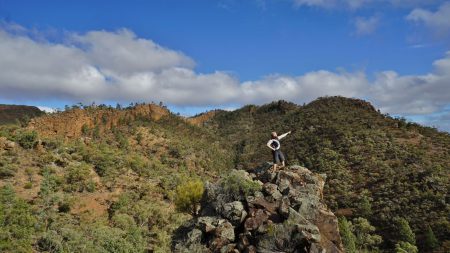 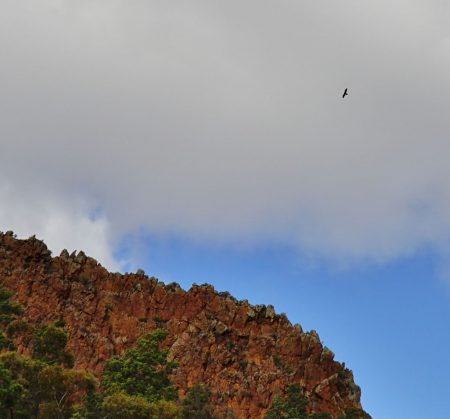 Riding off Skull rock was an exercise in self control. Usually on an unloaded bike it would be a case of let go of the brakes point and shoot! We needed to take a more measured approach on the loose weathered rocks, it’s a 5 hour return helicopter flight from the Royal Adelaide Hospital! Riding out on day 4 was more a formality. There are ways to extend this trip out another 40km on day 4 but we were keen to back in Adelaide for dinner.  The last 15 km on the sealed road afforded great views of Wipena Pound and allowed us time to reflect on awesome micro adventure.

This might look easy of paper but the double track varies from sandy through to rock creek beds. It’s all rideable on the right bike for the right person but after 3 days my tyres were bleeding sealant from all the cuts that had been inflicted. The going can be slow out here so wherever you plan to go expect a moving average of 10-16 km/h!

The Blinman Pub reopened late July making this trip a lot more comfortable for those who are looking to give it a go.

Riding on station properties is allowed but it is best to seek permission first and let them know you are out there. Search and rescue in these parts can put a lot of strain on local resources so play it safe and plan accordingly.